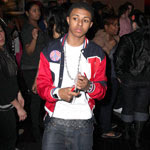 Lately I have been hearing a lot of people talking about Diggy Simmons and how he is just riding on the coat tails of his father’s fame. (For those who don’t know, Diggy Simmons is son to Rev Run of Run DMC and nephew to Russell Simmons)I found myself defending him to so many people. I think it is the opposite. I think he is making his own way completely separate from his father’s fame. True he probably wouldn’t have had the money to make a demo etc and he wouldn’t be signed to a label quite as fast but look at the times. Many artists are getting big for barely anything. Pro-Tools and a few friends who can help promote, you can get big without really having to break the bank.

I think lyrically Diggy stands alone. He is a different brand of rapper than what you see out now. I think that partnered with his father’s guidance and his own sense of self Diggy holds himself to a higher standard than money, cars, and hoes. His hustle is respectable. He is being featured with some greats like Lupe Fiasco, Wale, Charles Hamilton, Mickey Facts etc. He is one of the XXL Freshmen 2011 class and he ripped the BET Cipher a new one. I think after looking through the rest of his “classmates” he and Mac Miller are 2 of the better known bunch. I might even go so far as to say Diggy was the most deserving of the cover. Maybe I’m not up with the times but I don’t even recognize the others and I’m pretty sure I haven’t heard any of their music. I think Diggy is well on his way to being one of the best and though he is not riding on his father’s coat tails; he damn sure is blazing his own path; both with his style (clothes and rap) and lyrically. If he is in the freshman class, I’m scared to see him get to be a senior haha.

Maybe I defend Diggy so much because I used to watch him on Runs House. I saw him start his blog on fashion etc and it was like watching someone slowly accomplish their dreams. You can watch one episode of Runs House and see that this kid has the talent of Rev Run and the hustle of Russell. Now to see him on the cover of XXL and to hear him on tracks that make me nod my head it’s like watching a young relative make it. I don’t want to discredit the other rappers who may not have had such a public start, but I do think that world exposure at a young age has helped Diggy to capitalize. The rest of his accomplishment he is holding down on his own.

Favorite tracks of Diggys? I am He, Top of the World ft Uncle Murda, and Oh Yea. If you want to catch up on all the hottest music and follow (in my opinion) some of the best artists out right now, follow the All City Chess Club on Facebook. They release new stuff every week and if you’re bored there is always something new to watch and discover on their blog page. I promise you will NOT be disappointed.